Akinwande Oluwole "Wole" Soyinka (Yoruba: Oluwo̩lé S̩óyinká, pronounced "Shoyinka") (born 13 July 1934) is a Nigerian writer, notable especially as a playwright and poet; he was awarded the 1986 Nobel Prize in Literature, the first person in Africa to be so honoured.Soyinka was born into a Yoruba family in Abeokuta. After study in Nigeria and the UK, he worked with the Royal Court Theatre in London. In the fall of 2007 he was appointed Professor in Residence at Loyola Marymount University in Los Angeles, California, US. 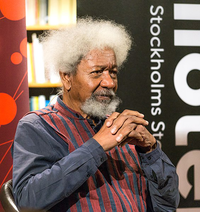 image credit
Wole Soyinka by Frankie Fouganthin, is licensed under cc-by-sa-4.0, resized from the original.