Winston Raymond Peters PC (born 11 April 1945) is a New Zealand politician and leader of the populist New Zealand First party which he founded in 1993. He has been the Member of Parliament for Northland since 2015. Peters has had a successful and turbulent political career since first becoming a Member of Parliament in the National Party win of 1978. Peters first served as a Cabinet Minister when Jim Bolger led the National Party to victory in 1990, before Bolger sacked him in 1991. As leader of New Zealand First, he held the balance of power after the 1996 election and formed a coalition with National, securing the positions of Deputy Prime Minister and Treasurer. However, the coalition dissolved in 1998 following the replacement of Bolger by Jenny Shipley as Prime Minister. In 1999 New Zealand First returned to Opposition before entering into a government again with the Labour Party in 2005, in which he served as the Minister of Foreign Affairs. On 29 August 2008 he stood down as a Minister pending a police investigation into a funding scandal involving Peters and New Zealand First. In the 2008 general election, New Zealand First failed to reach the five percent threshold and Peters did not regain his seat. As a result, neither Peters or New Zealand First were returned to Parliament. However, in the 2011 general election New Zealand First experienced a resurgence in support, winning 6.8 percent of the party vote to secure eight seats in Parliament. In the 2014 general election, NZ First gained 11 seats and finished with 8.6 percent. 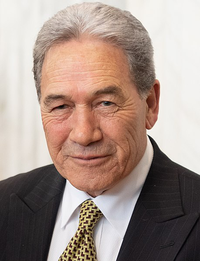