Willa Joannachance Holland (born June 18, 1991) is an American actress and fashion model. She is best known for her role as Kaitlin Cooper, Marissa Cooper's younger sister, on the television series The O.C. She also appeared on The CW series Gossip Girl, as Agnes Andrews, and Arrow, as Thea Queen. 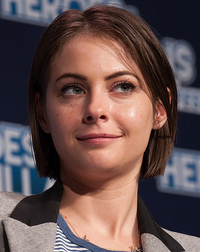 image credit
Willa Holland by Heroes & Villains, is licensed under cc-by-sa-2.0, resized from the original.