Wesley Trent Snipes (born July 31, 1962) is an American actor, film producer, and martial artist, who has starred in numerous films, including action thrillers and dramatic features. Snipes is known for playing the Marvel Comics character Blade in the Blade film trilogy, among various other high-profile roles. Snipes formed a production company, Amen-Ra Films, in 1991 and a subsidiary, Black Dot Media, to develop projects for film and television. Snipes has been training in martial arts since age 12, earning a 5th dan black belt in Shotokan Karate and 2nd dan black belt in Hapkido.In 2010, Snipes began serving a three-year prison sentence in McKean County, Pennsylvania for misdemeanor failure to file U.S. federal income tax returns. He was released from prison in 2013. 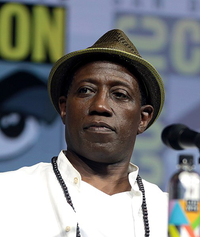 image credit
Wesley Snipes by Gage Skidmore, is licensed under cc-by-sa-2.0, resized from the original.