Wayne Eliot Knight (born August 7, 1955) is an American actor and comedian. He is best known for his roles as Newman in the TV sitcom Seinfeld and Officer Don Orville in 3rd Rock from the Sun. His other prominent roles include Dennis Nedry in Jurassic Park, Stan Podolak in Space Jam, Al McWhiggin in Toy Story 2, Tantor in Tarzan, Zack Mallozzi in Rat Race, Mr. Blik in Catscratch, and Haskell Lutz in The Exes. 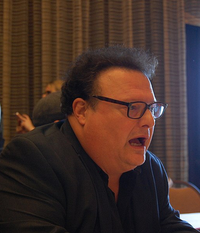 image credit
Wayne Knight by jennybento, is licensed under cc-by-sa-2.0, resized from the original.