Wallace Stevens (October 2, 1879 – August 2, 1955) was an American Modernist poet. He was born in Reading, Pennsylvania, educated at Harvard and then New York Law School, and he spent most of his life working as an executive for an insurance company in Hartford, Connecticut. He won the Pulitzer Prize for Poetry for his Collected Poems in 1955.Some of his best-known poems include "Anecdote of the Jar", "Disillusionment of Ten O'Clock", "The Emperor of Ice-Cream", "The Idea of Order at Key West", "Sunday Morning", "The Snow Man", and "Thirteen Ways of Looking at a Blackbird." 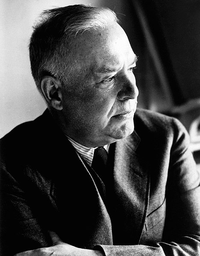