Wallace Michael "Wally" Shawn (born November 12, 1943) is a U.S. actor, playwright, and essayist. His best-known film roles include Wally Shawn in My Dinner with Andre (1981), Vizzini in The Princess Bride (1987), and Rex the toy dinosaur in the Toy Story animated film series. He also starred in a variety of T.V. shows, including Gossip Girl. His plays include The Designated Mourner, Aunt Dan and Lemon, and Grasses of a Thousand Colors; he also cowrote the screenplay for My Dinner with Andre with Andre Gregory, and scripted Vanya on 42nd Street, a film adaptation of Anton Chekov's play Uncle Vanya. 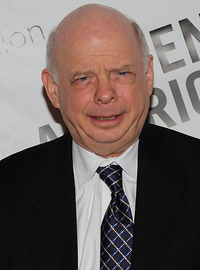 image credit
Wallace Shawn by PEN American Center, is licensed under cc-by-2.0, resized from the original.