Waheeda Rehman born on the 14th of May 1938 is an Indian actress who has appeared in mainly Hindi films, as well as Telugu films. She is noted for her contributions to different genres of films from the 1950s, 1960s and early 1970s. She has received a Centenary Award for Indian Film Personality, a Filmfare Lifetime Achievement Award, a National Film Award for Best Actress and two Filmfare Awards for Best Actress, throughout her career. Her other notable works include Solva Saal (1958), Baat Ek Raat Ki (1962), Kohra (1964), Bees Sal Baad (1962), Guide (1965), Teesri Kasam, Mujhe Jeene Do (1966), Neel Kamal and Khamoshi (1969). 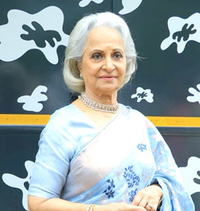 image credit
Waheeda Rehman by https://www.bollywoodhungama.com/, is licensed under cc-by-3.0, resized from the original.