(This name uses Philippine naming customs. The matronymic is Borja and the family name is Viceral.) Jose Marie Borja Viceral (born March 31, 1976), known by his stage name Vice Ganda, is a Filipino comedian, television presenter, endorser, actor, and recording artist. Viceral is a regular host/judge on ABS-CBN’s noontime variety show It's Showtime, and has starred in several films, five of which are considered the highest-grossing films in Philippine cinema. He is best known for his stand-up routines, in which he uses observational comedy, situational irony and sarcasm in pertaining to Filipino culture and human sexuality. He is also the first openly gay endorser for a major product in the Philippines (Globe Telecom). 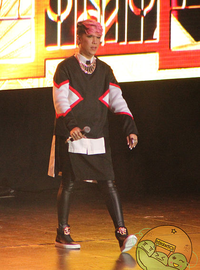 image credit
Vice Ganda by 001Jrm, is licensed under cc-by-sa-3.0, resized from the original.