Valentina Vladimirovna Tereshkova (Russian: Валенти́на Влади́мировна Терешко́ва; IPA: [vɐlʲɪnʲˈtʲinə vlɐˈdʲimʲɪrəvnə tʲɪrʲɪʂˈkovə] (13px ); born 6 March 1937) is a retired Soviet cosmonaut and engineer, and the first woman to have flown in space, having been selected from more than four hundred applicants and five finalists to pilot Vostok 6 on 16 June 1963. In order to join the Cosmonaut Corps, Tereshkova was only honorarily inducted into the Soviet Air Force and thus she also became the first civilian to fly in space.Before her recruitment as a cosmonaut, Tereshkova was a textile factory assembly worker and an amateur skydiver. 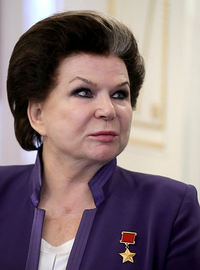 image credit
Valentina Tereshkova by Mikhail Klimentev, is licensed under cc-by-3.0, resized from the original.