Urvashi Sharma (Hindi: उर्वशी शर्मा) is an Indian Bollywood actress & model, born in Delhi in a Hindu Family. She has appeared in numerous print and television advertisements and featured in music videos like Mika's Something Something and Atif's "Doorie". Her debut movie, Naqaab, was released on 13 July 2007. She has a sister named Sucheta Sharma who was seen in movie Fashion in catwalk sequences along with Priyanka and Kangana. She has been honoured with the life membership of International Film And Television Club of Asian Academy Of Film & Television by Sandeep Marwah. She did modelling for Ponds, Garnier, TBZ and Globus. Her first campaign was for Ponds, then came Garnier, followed by Kit Kat and Monte Carlo. and Hyundai i10. 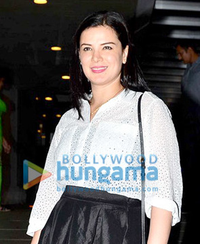 image credit
Urvashi Sharma by Bollywood Hungama, is licensed under cc-by-3.0, resized from the original.