Umm Kulthum (Egyptian Arabic: أم كلثوم‎‎ ʾUmm Kulsūm; Arabic pronunciation: [um kulˈθuːm]), born Fātimah ʾIbrāhīm as-Sayyid al-Biltāǧī (فاطمة إبراهيم السيد البلتاجي [ˈfɑtˤmɑ (ʔe)bɾɑˈhiːm esˈsæjjed elbelˈtæːɡi]; see Kunya) on an uncertain date (December 31, 1898, or May 4, 1904) and who died February 3, 1975, was an internationally famous Egyptian singer, songwriter, and film actress active from the 1920s to the 1970s. She was given the honorific title Kawkab al-Sharq كوكب الشرق ("Planet of the East") in Arabic. Known for her extraordinary vocal ability and style, Umm Kulthum was one of the greatest and most influential Arab singers of the 20th century and is arguably the single most prominent Arab woman in Contemporary history. 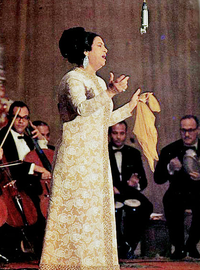