Patricia Anne Stratigias (/strætɨˈdʒiːəs/; born December 18, 1975) is a Canadian retired professional wrestler, former fitness model, and a fitness guru, actress and television personality, better known by her stage name and former ring name Trish Stratus. She is best known for her tenure with WWE.After beginning her career as a fitness model, Stratus began working for the World Wrestling Federation (WWF), which was later renamed World Wrestling Entertainment (WWE). She has also hosted several award and television shows, and owns a yoga studio. 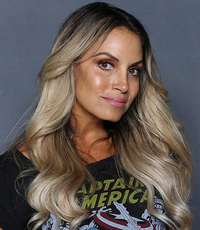 image credit
Trish Stratus by Supercon Conventions, is licensed under cc-by-2.0, resized from the original.