Michael Lamar White II (born June 18, 1999), known professionally as Trippie Redd, is an American rapper, singer-songwriter, and record producer. He is one of the most prominent members of the SoundCloud rap scene, which gained mainstream acclaim in the late 2010s. His debut mixtape A Love Letter to You (2017) and its lead single "Love Scars" propelled him to popularity. Trippie Redd's singles "Dark Knight Dummo", "Taking a Walk", and "Topanga", all reached the Billboard Hot 100. His debut studio album Life's a Trip (2018) and sophomore album ! (2019) both reached the top five of the Billboard 200, while his fourth mixtape, A Love Letter to You 4 (2019), topped the chart. Trippie Redd's third studio album Pegasus (2020) reached number two of the Billboard 200. 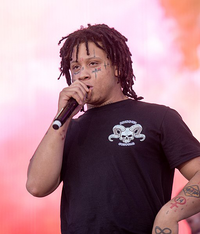 image credit
Trippie Redd by Frank Schwichtenberg, is licensed under cc-by-sa-4.0, resized from the original.