Tracy Lamar McGrady, Jr. (born May 24, 1979) is an American retired professional basketball player who played professionally in the National Basketball Association (NBA). He is a seven-time NBA All-Star, seven-time All-NBA selection, and a two-time NBA scoring champion (2003–2004). McGrady played as a swingman. McGrady entered the NBA straight from high school after being selected in the 1997 NBA draft with the ninth overall pick in the first round by the Toronto Raptors. He played in the NBA for the Raptors, Orlando Magic, Houston Rockets, New York Knicks, Detroit Pistons, Atlanta Hawks, and San Antonio Spurs. He also played for the Qingdao DoubleStar Eagles of the Chinese Basketball Association. In 2013, after the Spurs lost that year's NBA Finals he announced his retirement from the NBA. McGrady was ranked #75 on SLAM Magazine's "Top 75 Players of All-Time" in 2003. McGrady's style of play has been compared to that of George Gervin. Kobe Bryant has cited Tracy McGrady as the toughest player he ever played against. 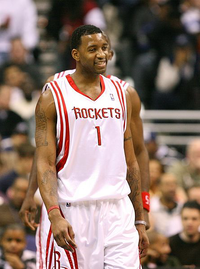 image credit
Tracy McGrady by Keith Allison, is licensed under cc-by-sa-2.0, resized from the original.