Tove Anna Linnéa Östman Styrke (Swedish pronunciation: [ˈtǔːvɛ ˈstʏ̂rːkɛ]; born 19 November 1992) is a Swedish singer and songwriter. She gained popularity as a contestant on Swedish Idol 2009, finishing in third place. After the show, she started a solo career in electropop. She released her debut album Tove Styrke in 2010. The New York Post included Styrke in its list of "10 Artists to Know in 2011". In 2015, she released her second album, Kiddo. Three years later, in 2018, she released her third album, Sway. Throughout the 2010s Styrke gained an increasing critical acclaim as an independent artist resulting in her single "Say My Name" being included in Rolling Stone's 100 best songs of the decade. 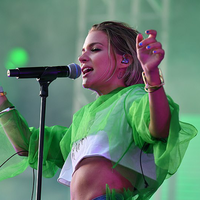 image credit
Tove Styrke by Julle, is licensed under cc-by-sa-4.0, resized from the original.