Tina Marie Majorino(/meɪdʒɵˈriːnoʊ/;born February 7, 1985) is an American film and television actress. She started her career as a child actor, starring in films such as Andre; When a Man Loves a Woman; Corrina, Corrina; and Waterworld.Despite her early success, she took a sabbatical from 1999 to 2004. She returned for one of her best known roles to date, the character Deb in the 2004 film Napoleon Dynamite. Since her return to acting, Majorino has been in television series such as Veronica Mars, Big Love and True Blood. She most recently had a recurring role in the TV series Grey's Anatomy and reprised the role of Mac in the Veronica Mars movie. 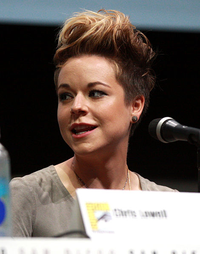 image credit
Tina Majorino by Gage Skidmore, is licensed under cc-by-sa-3.0, resized from the original.