Samuel Timothy "Tim" McGraw (born May 1, 1967) is an American singer, songwriter and actor. Many of McGraw's albums and singles have topped the country music charts with total album sales in excess of 40 million units in the US, making him the eighth best-selling artist, and the third best-selling country singer, in the Soundscan era. He is married to country singer Faith Hill and is the son of the late baseball player Tug McGraw. In acknowledgement of his grandfather's Italian heritage, McGraw was honored by the National Italian American Foundation (NIAF) in 2004, receiving the NIAF Special Achievement Award in Music during the Foundation's 29th Anniversary Gala. 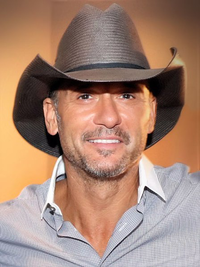 image credit
Tim McGraw by By Steve Kwak, is licensed under cc-by-2.0, resized from the original.