Tia Dashon Mowry-Hardrict (born July 6, 1978), known by her maiden name Tia Mowry, is an actress. She first gained fame for her teen role as Tia Landry on the ABC/WB sitcom Sister, Sister (opposite her identical twin sister Tamera Mowry). From 2006 until 2012, she portrayed medical student Melanie Barnett Davis on the CW/BET comedy-drama series The Game. She is also notable for starring in the television movie Twitches and its sequel Twitches Too. In 2013, Mowry became the main subject of the Nickelodeon's Nick at Nite show Instant Mom. 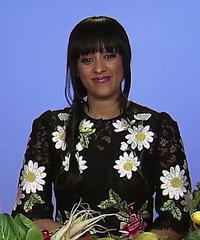 image credit
Tia Mowry by Sidewalks Entertainment, is licensed under cc-by-3.0, resized from the original.