Thurston Joseph Moore (born July 25, 1958) is an American musician best known as a singer, songwriter and guitarist of Sonic Youth. He has also participated in many solo and group collaborations outside of Sonic Youth, as well as running the Ecstatic Peace! record label. Moore was ranked 34th in Rolling Stone's 2004 edition of the "100 Greatest Guitarists of All Time." In May 2012, Spin published a staff-selected top 100 ranking Moore and his Sonic Youth bandmate Lee Ranaldo together on number 1.In 2012, Moore started a new band Chelsea Light Moving, with their first track, "Burroughs", released as a free download. Chelsea Light Moving's eponymous debut was released on 5 March 2013. 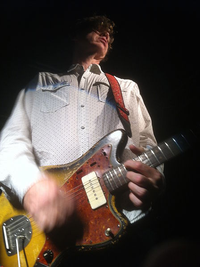 image credit
Thurston Moore by Jtcoutts, is licensed under cc-by-sa-4.0, resized from the original.