Gou Tai-ming, also known as Terry Gou, (traditional Chinese: 郭台銘; simplified Chinese: 郭台铭; pinyin: Guō Táimíng) (born October 8, 1950 in Banqiao Township, Taipei County) is a Taiwanese tycoon who is the founder and chairman of Foxconn, a company that manufactures electronics on contract for other companies such as Apple Inc.. It is the largest such electronics manufacturing services company in the world, with factories in several countries, mostly in mainland China, where it employs 1.2 million people and is its largest exporter. 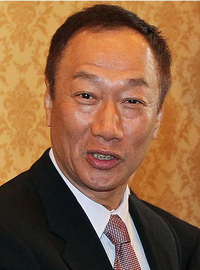 image credit
Terry Gou by dilmarousseff, is licensed under cc-by-sa-2.0, resized from the original.