Leslie Wunderman (born March 7, 1962), better known by her stage name Taylor Dayne, is an American pop and freestyle music singer-songwriter and actress. In late 1987, she scored her first major hit when her debut single "Tell It to My Heart" reached No. 7 on the Hot 100. She then went on to have a string of hits in the late 1980s and early 1990s, including the No. 1 Billboard hit "Love Will Lead You Back". Overall, she has had eighteen individual hit songs reach the top ten in Billboard magazine. These include most recently, the 2011 American and international hit "Floor on Fire" and the 2008 song "Beautiful", which reached the top spot in Billboard's Hot Dance Club Play Chart. She has also topped the U.S. Billboard Hot Dance Club Play chart three times.[citation needed] 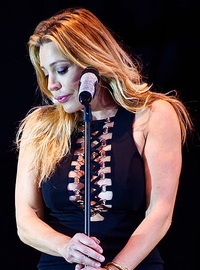 image credit
Taylor Dayne by Justin Higuchi, is licensed under cc-by-2.0, resized from the original.