Takeru Satoh (佐藤 健, Satō Takeru, born 21 March 1989) is a Japanese actor. He is best known for his leading role as Ryotaro Nogami in the Kamen Rider Den-O franchise, and as Himura Kenshin in the live-action Rurouni Kenshin film and its sequels. Satoh was born on 21 March 1989 in Iwatsuki-ku, Saitama. Satoh briefly worked as a child actor for three or four years, appearing in commercials and magazine photo shoots. After he entered higher grades in elementary school, he decided not to continue as a child actor due to a "shy personality". He graduated from Koshigaya Kita High School, Saitama in 2007. In the same year, while shooting Kamen Rider Den-O, he was diagnosed with primary pneumothorax after complaining about pain in the left chest, and has since recovered. 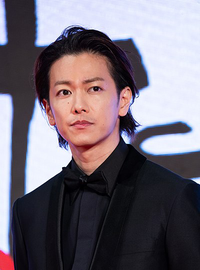 image credit
Takeru Satoh by Dick Thomas Johnson, is licensed under cc-by-2.0, resized from the original.