Dong Young-bae (Korean: 동영배; born 18 May 1988), better known by his stage name Taeyang (Hangul: 태양, Hanja: 太陽, meaning Sun) or Sol, is a South Korean singer, dancer, recording artist, model and actor. After appearing in Jinusean's music video "A-yo", Taeyang began training under YG Entertainment at the age of 12 alongside fellow member and leader G-Dragon. After six years of vocal and dance training, he made his debut in 2006 as a member of popular Korean boy band, Big Bang.He was ranked at #33 on 100 Most Handsome Faces of 2013. 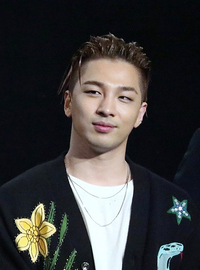 image credit
Taeyang by File:Taeyang - MADE THE, is licensed under cc-by-4.0, resized from the original.