Sybil Danning (born Sybille Johanna Danninger; May 24, 1952) is an Austrian actress, model and film producer. She is best known for her frequent appearances in B movies during the 1970s and 1980s. Born in Wels, Austria, Danning spent most of her childhood on military bases and travelling with her family around the world. After their return to Austria, she landed a job as a dental hygienist to support her family following her parents divorce. At the age of sixteen, Danning left her home and relocated to Salzburg, where she enrolled at a school of cosmetology. Working as a cosmetician, she soon got offered fashion shows and photo layouts. She made her screen debut in the German comedy, Komm nur, mein liebstes Vögelein (1968), followed by the role of Kriemhild in the erotic action film, The Long Swift Sword of Siegfried (1971). She continued receiving small parts in films mostly based on her sex symbol image. In 1978, Danning moved to Hollywood to further her career in American films. Her first film role was in Roger Corman's science fiction cult classic, Battle Beyond the Stars (1980), which established her as a B movie actress. She appeared in a number of films during the 1980s such as Chained Heat (1983), Hercules (1983), Malibu Express (1985), Howling II: Your Sister Is a Werewolf (1985) and Reform School Girls (1986). In 1990, her acting career was delayed after having an accident while rehearsing a film stunt. Suffering from a spinal disc herniation, Danning went on a hiatus from the film industry. 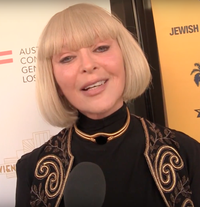 image credit
Sybil Danning by Jew Tube, is licensed under cc-by-3.0, resized from the original.