Summer Marjani Walker (born April 11, 1996) is an American singer-songwriter from Atlanta, Georgia. She is signed to Love Renaissance and Interscope Records. Her commercial mixtape Last Day of Summer was released on October 19, 2018 through Interscope Records. The mixtape spawned the single "Girls Need Love" which became her first top 40 entry on the Billboard Hot 100 chart following a remix featuring Drake, peaking at number 37 respectively. In January 2019, Walker released her debut EP, CLEAR, which she later followed up with her debut album. Her debut studio album, Over It was released on October 4, 2019 and received universal acclaim from critics. The album debuted and peaked at number two on the Billboard 200 chart and is certified platinum by the Recording Industry Association of America (RIAA). The album also spawned the Billboard Hot 100 top 20 single "Playing Games". In 2019, Walker made history when her debut album earned the biggest streaming debut-week ever for a female R&B artist. She was also the recipient for Best New Artist at the 2019 Soul Train Music Awards. 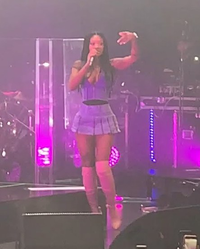 image credit
Summer Walker by Meet The Blacks, is licensed under cc-by-3.0, resized from the original.