Khalick Antonio Caldwell (born January 1, 1996), better known as Stunna 4 Vegas (formerly stylized as $tunna 4 Vegas), is an American rapper. He is currently signed to fellow North Carolina rapper DaBaby's label Billion Dollar Baby Entertainment. His most popular singles are "Animal", which featured DaBaby, and "Up The Smoke" featuring Offset. Other hit singles include "Ashley", also featuring DaBaby, "Tomorrow" featuring Moneybagg Yo, and "Do Dat" featuring DaBaby and Lil Baby. His debut album, BIG 4X, was released on May 10, 2019. It peaked at number 50 on the Billboard 200. His second studio album, Rich Youngin, was released on January 17, 2020. It debuted at number 29 on the Billboard 200. He is cousins with Philadelphia Eagles defensive tackle Javon Hargrave. 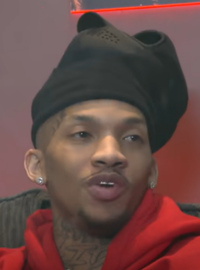 image credit
Stunna 4 Vegas by The 85 South Comedy Show, is licensed under cc-by-3.0, resized from the original.