Steve Austin (born Steven James Anderson; December 18, 1964), better known by his ring name "Stone Cold" Steve Austin, is an American actor, producer, and retired professional wrestler. Austin performed for several wrestling promotions such as World Championship Wrestling (WCW), Extreme Championship Wrestling (ECW) and the World Wrestling Federation (WWF). Declared by WWE (formerly WWF) chairman Vince McMahon to be the most profitable wrestler in the company's history, he gained mainstream popularity in the WWF in the late 1990s as "Stone Cold" Steve Austin, a disrespectful, beer-drinking antihero who routinely defied the establishment and his boss Mr. In 2011, Steve Austin returned to WWE to host the reboot of the reality series Tough Enough. 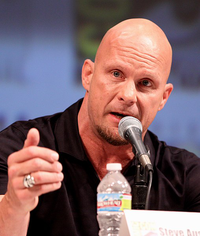