Gordon Matthew Thomas Sumner CBE (born 2 October 1951), better known by the stage name Sting, is an English musician, singer-songwriter, multi-instrumentalist, activist, actor and philanthropist. He is best known as the principal songwriter, lead singer, and bassist for the pioneering new wave rock band The Police and for his influential subsequent solo career.Sting has varied his musical style, incorporating distinct elements of rock, jazz, reggae, classical, new-age, and worldbeat into his music. Sting has also collaborated with other musicians, including the duet "Rise & Fall" with Craig David and the number one hit "All for Love", with Bryan Adams and Rod Stewart. 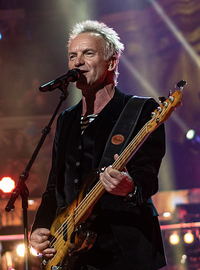 image credit
Sting (musician) by Raph_PH, is licensed under cc-by-2.0, resized from the original.