Steven Frederic Seagal (born April 10, 1952) is an American actor, film producer, screenwriter, film director, martial artist, musician and reserve deputy sheriff. A 7th-dan black belt in Aikido, Seagal began his adult life as an Aikido instructor in Japan. He became the first foreigner to operate an Aikido dojo in Japan. In addition to his professional achievements, he is also known as an environmentalist,[citation needed] an animal rights activist, and a supporter of the 14th Dalai Lama, Tenzin Gyatso. 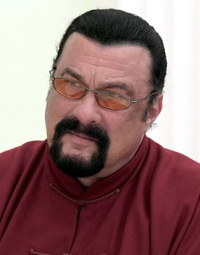 image credit
Steven Seagal by : - English:, is licensed under cc-by-4.0, resized from the original.