Stephen Louis "Steve" Fisher (born March 24, 1945) is an American basketball coach who is currently employed as the men's basketball coach at San Diego State University in San Diego, California. Fisher also has served as the head coach at the University of Michigan, where he won the national championship in 1989, and was an assistant at Michigan, Western Michigan University, and the Sacramento Kings of the National Basketball Association.Fisher attended Illinois State University, where he helped lead the Redbirds to the 1967 Division II Final Four. 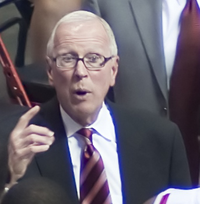 image credit
Steve Fisher by Dirk Hansen, is licensed under cc-by-2.0, resized from the original.