Steven Anthony "Steve" Ballmer (born March 24, 1956) is an American businessman who was the CEO of Microsoft from January 2000 to February 2014. As of 2014, his personal wealth is estimated at $20.7 billion, ranking number 32 on the Forbes 400. It was announced on August 23, 2013, that he would step down as Microsoft's CEO within 12 months. On February 4, 2014, Ballmer retired as CEO and was succeeded by Satya Nadella; Ballmer remains on the Board of Directors. 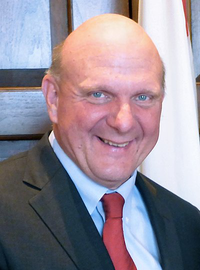 image credit
Steve Ballmer by Eric Garcetti, is licensed under cc-by-2.0, resized from the original.