Stephen Pearcy (born July 3, 1956) is an American vocalist, best known as the former lead singer of the metal band Ratt, from 1974 until 2014. He has also been in the bands Buster Cherry, Mickey Ratt, Arcade, Vicious Delite, Vertex, Nitronic, and Band from Hell. He has also recorded as a solo artist. Pearcy has also worked as an actor, playing the killer hippie, Timothy Bach, in the horror film "Camp Utopia". 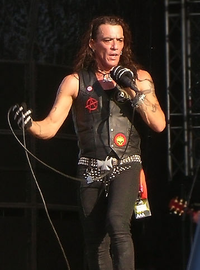 image credit
Stephen Pearcy by ppelmos, is licensed under cc-by-3.0, resized from the original.