Jermaine Eric Shute (born December 15, 1984), better known by his stage name Starlito (formerly All $tar Cashville Prince) is an American rapper. He gained his first national look for the 2005 song "Grey Goose", which featured artists Young Jeezy and Yo Gotti. His second single, released in 2007, was "Champagne Crazy", featuring then labelmate Lil Wayne. His third radio single was "I Go Ham" and would later also feature the Atlanta rapper Gucci Mane. During 2013 alone, Starlito's albums appeared on the Billboard Top 200 albums chart three times in a four-month span (Cold Turkey, Stepbrothers Two, and Fried Turkey). On March 15, 2017, Starlito and Don Trip released their Stepbrothers Three project, which was followed by a 43-city United States tour. 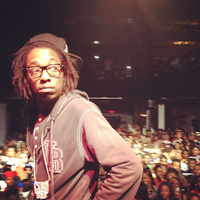 image credit
Starlito by Logan Garrett, is licensed under cc-by-sa-3.0, resized from the original.