Stacy Ann-Marie Keibler (born October 14, 1979) is an American actress, model, and former professional wrestler and valet, best known for her work with World Championship Wrestling (WCW) and World Wrestling Entertainment (WWE).Keibler was a contestant on the second season of Dancing with the Stars, where she placed third. She has also appeared on other American Broadcasting Company (ABC) shows such as What About Brian, George Lopez, and October Road, as well as the 100th episode of the CBS sitcom How I Met Your Mother as a bartender and on the USA Network show Psych. During her time on Dancing with the Stars, judge Bruno Tonioli nicknamed her "The Weapon of Mass Seduction" because of her long legs. 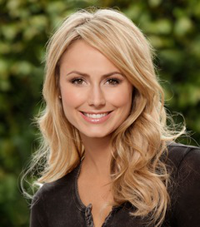 image credit
Stacy Keibler by Cliff Lipson, is licensed under cc-by-sa-3.0, resized from the original.