Sophie Xeon (17 September 1986 – 30 January 2021), known mononymously as Sophie (stylised in all caps), was a Scottish musician, record producer, singer and DJ. Known for a brash and "hyperkinetic" take on pop music, Sophie worked closely with artists from the PC Music label, including A.G. Cook and GFOTY, and produced for acts such as Charli XCX, Vince Staples, Kim Petras, Madonna, Let's Eat Grandma, and Namie Amuro. 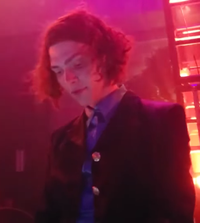 image credit
Sophie (musician) by KateVEVO, is licensed under cc-by-3.0, resized from the original.