Sophie Danièle Sylvie Maupu (French pronunciation: ​[sɔfi maʁso]; born 17 November 1966) is a French actress, director, screenwriter, and author. She has appeared in 39 films. As a teenager, Marceau achieved popularity with her debut films La Boum (1980) and La Boum 2 (1982), receiving a César Award for Most Promising Actress. She became a film star in Europe with a string of successful films, including L'Étudiante (1988), Pacific Palisades (1990), Fanfan (1993), and Revenge of the Musketeers (1994). Marceau became an international film star with her performances in Braveheart (1995), Firelight (1997), and the nineteenth James Bond film The World Is Not Enough (1999). 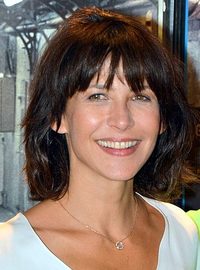 image credit
Sophie Marceau by Georges Biard, is licensed under cc-by-sa-3.0, resized from the original.