Joseph Junior Adenuga (born 19 September 1982), known professionally as Skepta, is a British grime MC, rapper, songwriter and record producer. His influence on contemporary British popular culture as a key figure in the grime scene saw him appear on Debrett's 2017 list of the most influential people in the UK. On 4 April 2018, he was installed as a chief in his family's ancestral Nigerian hometown in Ogun State, receiving the chieftaincy title of the Amuludun of Odo-Aje. 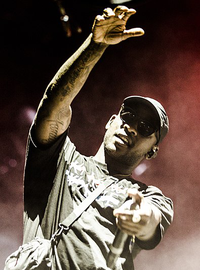 image credit
Skepta by Batiste Safont, is licensed under cc-by-sa-4.0, resized from the original.