Shubhdeep Singh Sidhu, better known by his stage name Sidhu Moose Wala, is a Punjabi Indian singer, rapper, songwriter lyrisist and actor associated with Punjabi music and Punjabi cinema. He started his career with writing the lyrics of the song "License" sung by Ninja, and began his singing career on a duet song titled "G Wagon". Following his debut, he collaborated with Brown Boys for various tracks which were released by Humble Music. 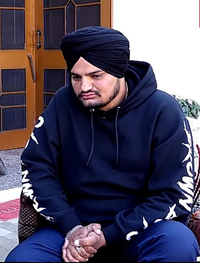