Waylon Albright "Shooter" Jennings (born May 19, 1979) is an American singer-songwriter active in the outlaw country music and Southern rock genres, as well as making his first foray into psychedelic rock in 2009. Signed to Universal South Records, Jennings made his debut with the single "4th Of July" of his 2005 album Put the "O" Back in Country, which peaked at No. 22 on the Billboard country charts. Jennings has since followed with six more full-length studio albums: Electric Rodeo (2006), The Wolf (2007), Black Ribbons (2009), Family Man (2012), The Other Life (2013) and Countach (For Giorgio) (2016), in addition to a live album, a compilation, and numerous EPs. 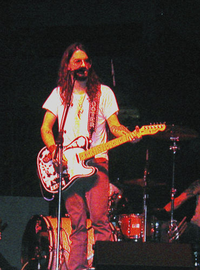 image credit
Shooter Jennings by en:User:ScottFisher, is licensed under cc-by-sa-3.0, resized from the original.