Shigeru Miyamoto (Japanese: 宮本 茂 Hepburn: Miyamoto Shigeru, born November 16, 1952) (pronounced [mijamoto ɕiŋeɽu͍; ɕiɡeɽu͍]) is a Japanese video game designer and producer. He is best known as the creator of some of the most critically acclaimed and best-selling video games of all time. Miyamoto originally joined Nintendo in 1977, when the company was beginning its foray into video games, and starting to abandon the playing cards it had made since 1889. His games have been seen on every Nintendo video game console, with his earliest work appearing on arcade machines in the late 70s. Franchises Miyamoto has helped create include the Mario, Donkey Kong, The Legend of Zelda, Star Fox, F-Zero, Pikmin, and Wii series. Noteworthy games within these include Super Mario Bros., one of the most well known video games; Super Mario 64; and The Legend of Zelda: Ocarina of Time, one of the most critically acclaimed video games of all time. As a result of Nintendo president Satoru Iwata's death in July 2015, Miyamoto fulfilled the role of acting Representative Director, alongside Genyo Takeda, until being appointed as the company's "Creative Fellow" in September 2015. He formerly managed the Entertainment Analysis & Development division, which developed many of Nintendo's first-party titles. 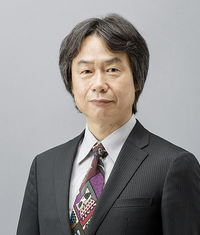 image credit
Shigeru Miyamoto by , is licensed under cc-by-4.0, resized from the original.