Mian Muhammad Shahbaz Sharif (Punjabi and Urdu: میاں محمد شہباز شریف‎, pronounced [miˈãː mʊˈɦəmːəd̪ ʃɛhˈbaːz ʃəˈriːf]; born 23 September 1951) is a Pakistani politician who is the current Leader of the Opposition in the National Assembly of Pakistan, in office since 20 August 2018. He has been a member of the National Assembly since 13 August 2018 and is the current President of the Pakistan Muslim League-N. Previously, he has served as the Chief Minister of Punjab three times in his political career making him the longest-serving Chief Minister of Punjab. Shehbaz was elected to the Punjab Provincial Assembly in 1988 and to the National Assembly in 1990. He was again elected to the Punjab Assembly in 1993 and named Leader of the Opposition. He was elected as chief minister for first time in 1997, Shehbaz was sworn in as the Chief Minister of Punjab on 20 February 1997. After a military coup deposed the government in 1999, Shehbaz along with family spent years of self-exile in Saudi Arabia, returning to Pakistan in 2007. Shehbaz was appointed Chief Minister for a second term after the PML-N's victory in the province in the 2008 general elections. He was elected as Chief Minister of Punjab for the third time in 2013 and served his term until his party's defeat in the 2018 general election. He was nominated as the President of the Pakistan Muslim League-N after his brother Nawaz Sharif was disqualified from holding office. He was nominated as the Leader of the Opposition after the 2018 election. In December 2019, the National Accountability Bureau froze 23 properties belonging to Shehbaz and his son, Hamza Sharif, accusing them of money laundering. On 28 September 2020, NAB arrested Shehbaz at Lahore High Court and indicted him on charges of money laundering. He was incarcerated pending trial. On 14 April 2021, Lahore High Court released him on bail in money laundering reference. 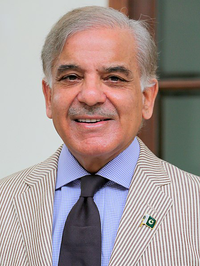