Shashi Kapoor, born Balbir Raj Prithviraj Kapoor on 18 March 1938 in Calcutta (now Kolkata), is an Indian film actor and film producer. He has also been a film director and assistant director in the Hindi film industry. He is a member of the Kapoor family, a film dynasty in India's Bollywood cinema. He is the younger brother of Raj Kapoor and Shammi Kapoor, the son of Prithviraj Kapoor, the widower of Jennifer Kendal, and the father of Karan Kapoor, Kunal Kapoor, and Sanjana Kapoor. He has appeared in a large number of Hindi films as well as in a few English-language films. In 2011, he was honoured with the Padma Bhushan by the Government of India. 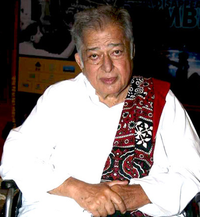 image credit
Shashi Kapoor by http://www.bollywoodhungama.com, is licensed under cc-by-3.0, resized from the original.