Shaquille Rashaun O'Neal (/ʃəˈkiːl/ shə-KEEL; born March 6, 1972), nicknamed Shaq (/ˈʃæk/ SHAK), is an American retired basketball player, former rapper and current analyst on the television program Inside the NBA. Standing 7 ft 1 in (2.16 m) tall and weighing 325 pounds (147 kg), he was one of the heaviest players ever to play in the NBA. He has appeared in numerous films and has starred in his own reality shows, Shaq's Big Challenge and Shaq Vs. 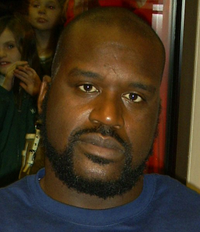 image credit
Shaquille O'Neal by Craig, is licensed under cc-by-sa-2.0, resized from the original.