Shannon Marie Kahololani Sossamon (born October 3, 1978), known as Shannyn Sossamon, is an American actress and musician. She starred in the films A Knight's Tale, 40 Days and 40 Nights, Wristcutters: A Love Story, The Order and Road to Nowhere. Sossamon also had a starring role on the CBS supernatural drama, Moonlight. As a musician she provided vocals and drums to Warpaint from 2004 to 2008, when she left the band. 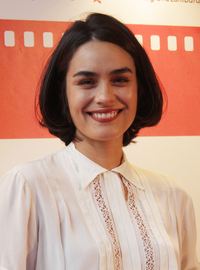 image credit
Shannyn Sossamon by Filippo mezetti, is licensed under cc-by-sa-3.0, resized from the original.