Shailene Diann Woodley (born November 15, 1991) is an American actress. She portrayed Amy Juergens in the ABC Family series The Secret Life of the American Teenager (2008–2013) and co-starred alongside George Clooney in the 2011 film The Descendants. In 2014, Woodley starred as Beatrice "Tris" Prior in the film adaptation of Veronica Roth's novel Divergent, and will play Hazel Grace Lancaster in The Fault in Our Stars, based on the novel of the same name by John Green.For her performance in The Descendants, she won the Independent Spirit Award for Best Supporting Female and was nominated for the Golden Globe Award for Best Supporting Actress - Motion Picture. In the film The Spectacular Now, she won the Special Jury Award for Acting at the 2013 Sundance Film Festival. 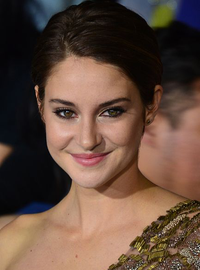 image credit
Shailene Woodley by Mingle Media TV, is licensed under cc-by-sa-2.0, resized from the original.