(This name uses Spanish naming customs: the first or paternal family name is García and the second or maternal family name is Fernández.) Sergio García Fernández (born 9 January 1980) is a professional golfer from Spain who plays on both the PGA Tour and the European Tour. He has won over 20 international tournaments, including The Players Championship in 2008. García has spent much of his career in the top 10 of the Official World Golf Ranking (over 300 weeks between 2000 and 2009). He reached a career high ranking of 2nd after winning the HSBC Champions tournament in November 2008, and has achieved post-tax career earnings of more than $28 million. As a player, he is particularly noted for his strong iron play and accuracy. To date he has not won any of golf's major championships, despite a number of near misses. He has finished a runner-up on four occasions, twice at The Open Championship and twice at the PGA Championship, with a further six top five finishes without breaking through. Garcia has career earnings on the PGA Tour of over $43 million, highest of those without a major championship win. 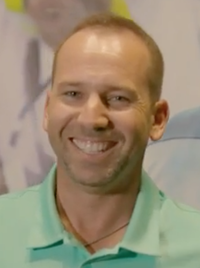 image credit
Sergio Garca by AJGA, is licensed under cc-by-3.0, resized from the original.