Sergio Busquets Burgos (Spanish pronunciation: [ˈserxjo βusˈkets], Catalan: [busˈkɛts]; born 16 July 1988) is a Spanish professional footballer who plays for FC Barcelona in La Liga, and the Spanish national team, as a defensive midfielder.He was a relatively obscure player when he arrived in FC Barcelona's first team in July 2008, but eventually made a name for himself in a relatively short period of time, reaching the Spanish national team in less than one year after making his professional club debut.Busquets helped Spain win the 2010 World Cup and the Euro 2012 tournaments. 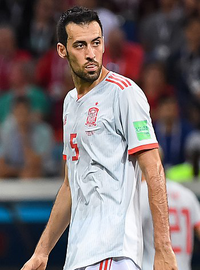 image credit
Sergio Busquets by , is licensed under cc-by-sa-3.0, resized from the original.