Sean Patrick Flanery (born October 11, 1965) is an American actor, known for playing Connor MacManus in The Boondock Saints, Greg Stillson in The Dead Zone, Jeremy "Powder" Reed in Powder, Indiana Jones in The Young Indiana Jones Chronicles, as well as Bobby Dagen in Saw 3D. He is also known for his role as Sam Gibson on The Young and the Restless in 2011. He starred in Devil's Carnival, a short film which was screened on tour beginning in April, 2012. 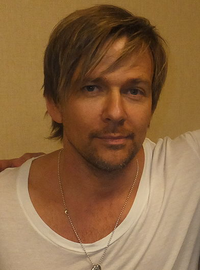 image credit
Sean Patrick Flanery by Rob DiCaterino, is licensed under cc-by-2.0, resized from the original.