Scout Taylor-Compton (born February 21, 1989) is an American actress. She has appeared in numerous small television roles and in feature films that range from dramas to those in the horror genre. Her most notable roles include Laurie Strode in the horror films Halloween (2007) and Halloween II (2009), as well as Lita Ford in the film The Runaways (2010).In addition to taking vocal lessons and singing the theme song for her film Chicken Night (2001), Taylor-Compton is recording her debut rock album. Taylor-Compton had also provided voice over work in other films, including The Core (2003) and The Princess Diaries 2: Royal Engagement (2004).In January 2014, Taylor-Compton was announced to portray the role of Arriane Alter in the movie adaptation of Lauren Kate's YA series, Fallen (2014). 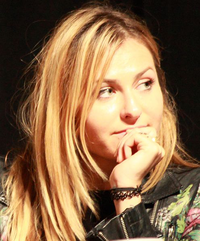 image credit
Scout Taylor-Compton by Sam Howzit, is licensed under cc-by-2.0, resized from the original.